Gothic tattoos are a popular tattoo style that features dark, mysterious, and often macabre themes. These tattoos often feature intricate designs, bold lines, and a range of symbolism that reflects the gothic aesthetic. In this article, we will explore everything you need to know about gothic tattoos, including their meanings, popular placements, and the history and origins of the gothic style.

What Does the Gothic Term Mean?

The term "gothic" refers to a style of art and literature that originated in the Middle Ages and was characterized by its dark, mysterious, and often macabre themes. In contemporary culture, the term "gothic" is often used to refer to a subculture that is associated with the gothic aesthetic, including music, fashion, and tattoos.

The Meaning Behind Gothic Tattoos?

Gothic tattoos can have a wide range of meanings, depending on the specific design and symbolism used. Some common themes in gothic tattoos include death, decay, and the macabre, as well as themes of rebellion and non-conformity. These tattoos may also include elements of occult or supernatural symbolism, such as skulls, crossbones, and other death-related imagery. Ultimately, the meaning behind a gothic tattoo will depend on the individual wearer and the specific tattoo design.

Upper arm gothic tattoo: The upper arm is a popular placement for gothic tattoos, as it allows for larger designs that can showcase the intricate details and bold lines of the gothic style. A gothic tattoo on the upper arm may symbolize strength, power, and rebellion. 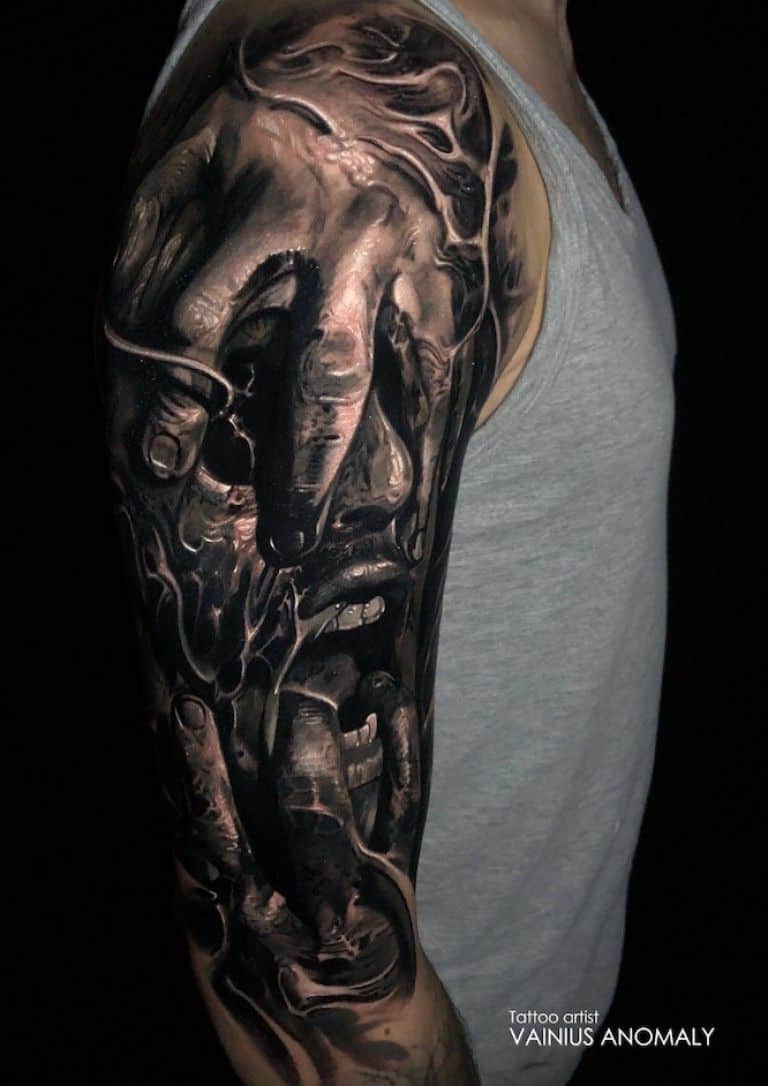 Hand gothic tattoo: A gothic tattoo on the hand can be a bold and attention-grabbing choice. These tattoos may symbolize a desire to stand out or make a statement. 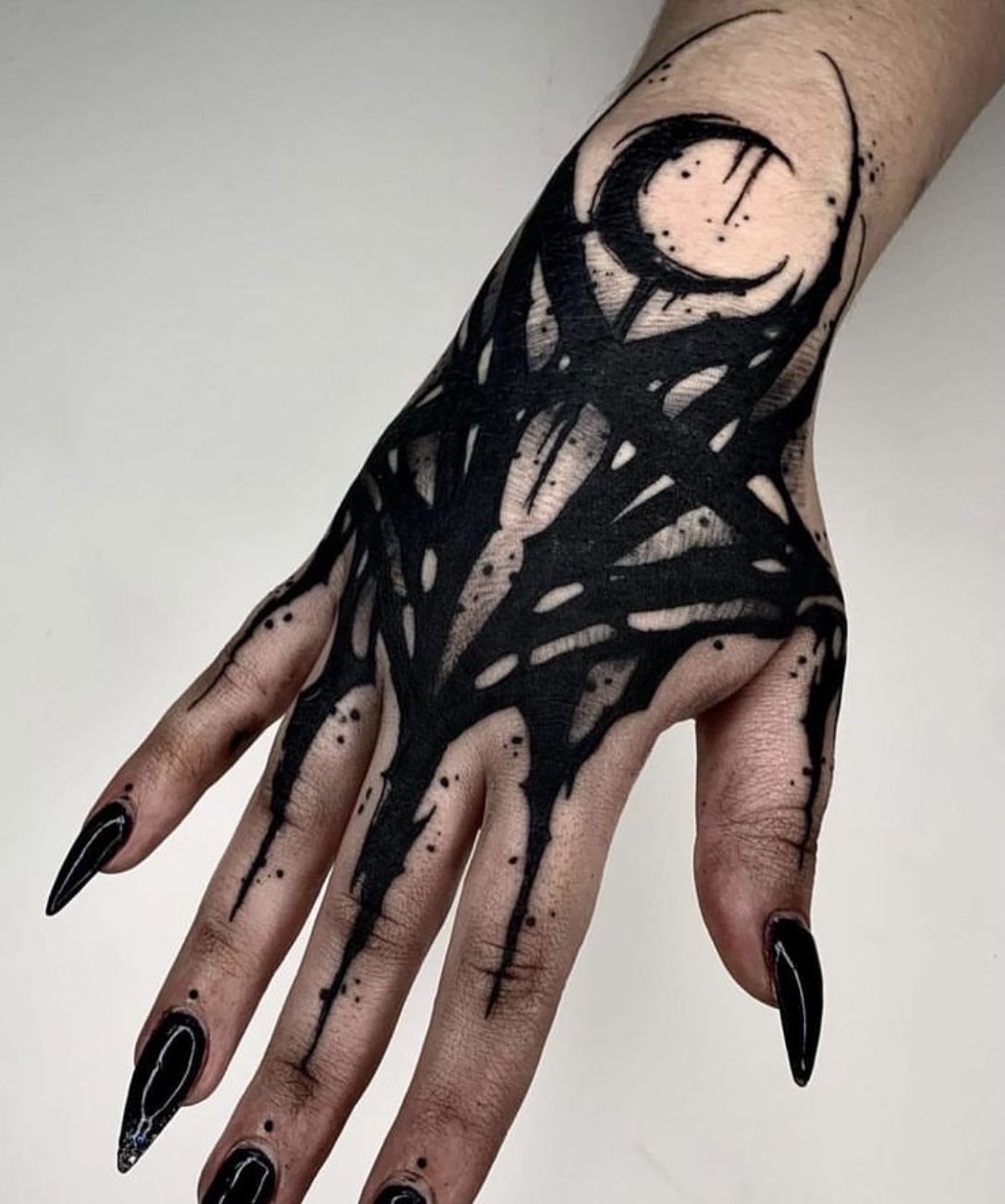 Forearm gothic tattoo: The forearm is another popular placement for gothic tattoos, as it allows for medium-sized designs that can be easily visible. A gothic tattoo on the forearm may symbolize a connection to the gothic subculture or a fascination with the dark and mysterious. 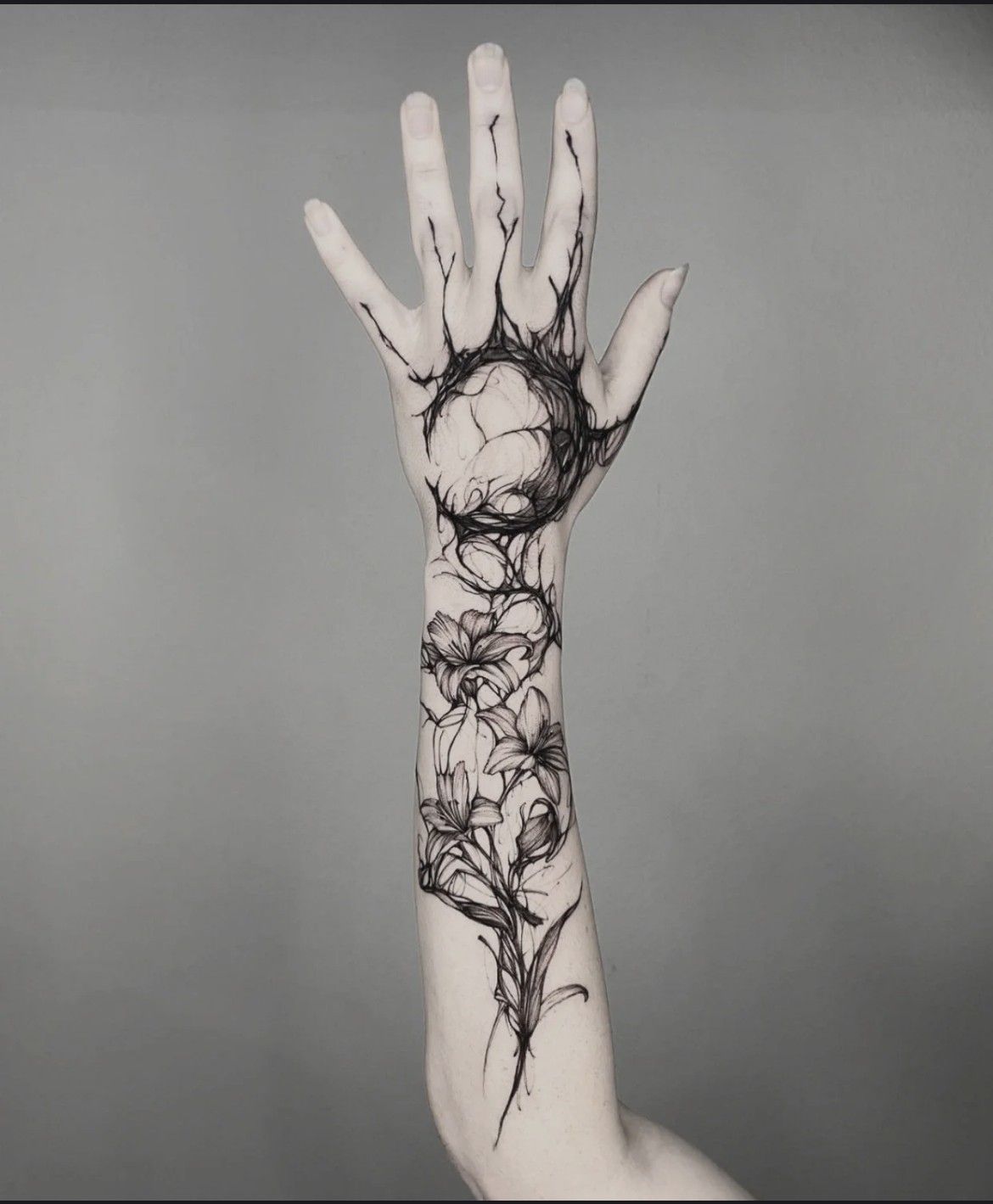 Thigh gothic tattoo: A gothic tattoo on the thigh may be more discreet, but it can still make a bold statement. These tattoos may symbolize a sense of mystery or intrigue. 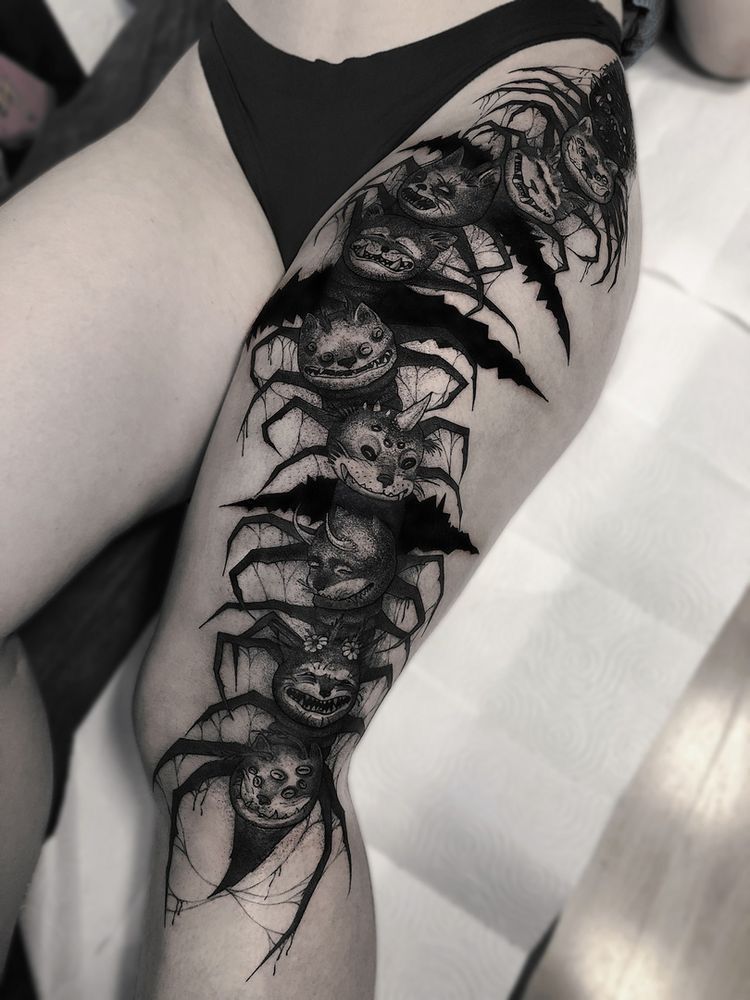 Behind the ear gothic tattoo: A gothic tattoo behind the ear is a subtle and discreet placement that can still make a statement. These tattoos may symbolize a desire for secrecy or a connection to the gothic subculture. 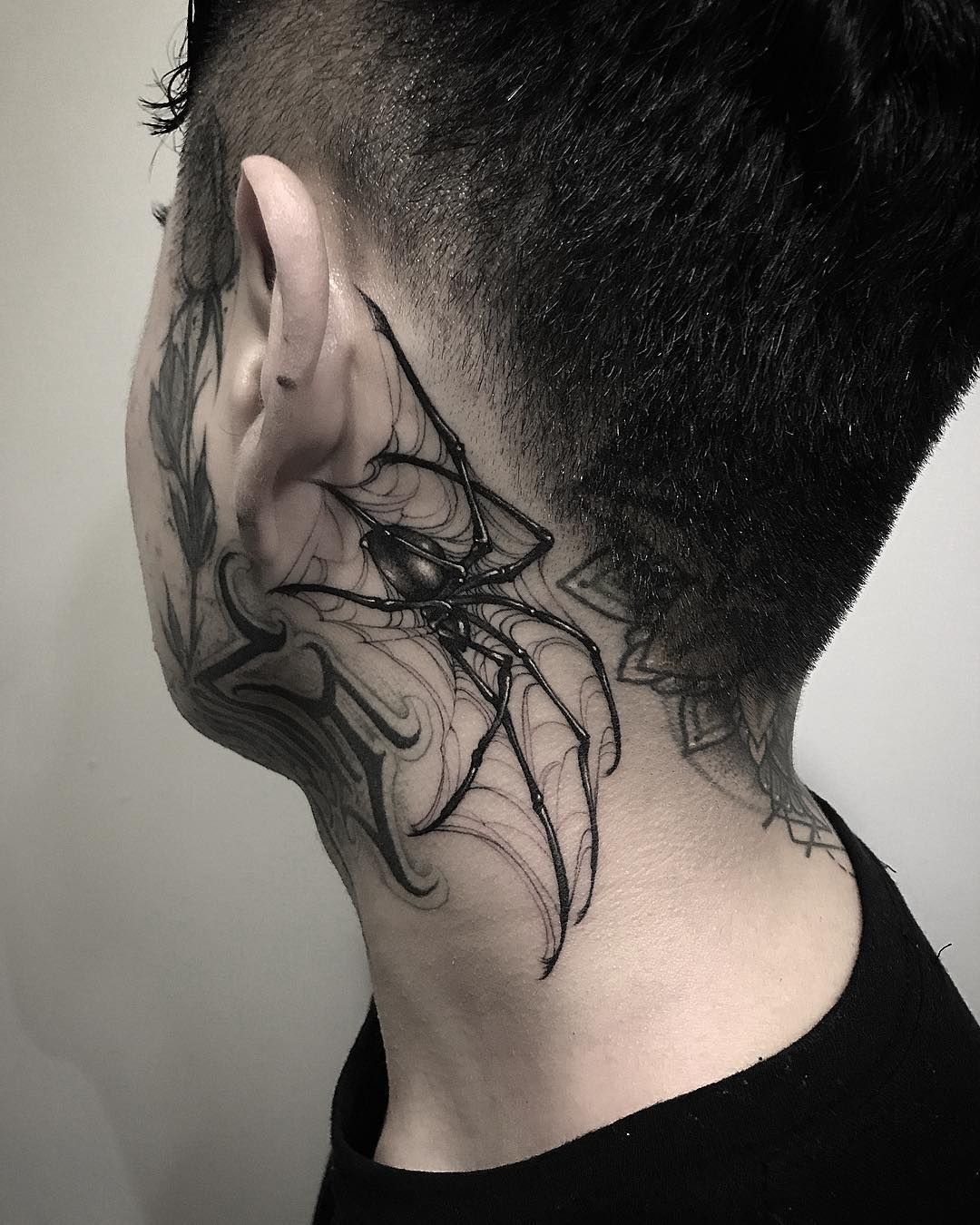 Who should get a Gothic tattoo?

Ultimately, the decision to get a gothic tattoo should be based on personal preference and style. If you are drawn to the dark, mysterious, and often macabre themes of the gothic style, and you feel comfortable with the permanence of a tattoo, then a gothic tattoo may be a good choice for you. It is important to carefully consider the placement and design of your tattoo, as well as any potential cultural or social implications.

History and Origin of the Gothic Style

The gothic style has a long and varied history, with roots in medieval art and literature as well as the Victorian era. The gothic aesthetic was popularized in the 19th and early 20th centuries by writers such as Edgar Allan Poe and Bram Stoker, and it has continued to influence art, literature, and popular culture to the present day. The gothic subculture, which is associated with the gothic aesthetic, emerged in the 1980s and has since become a global phenomenon.

What are some common symbols used in gothic tattoos?

Common symbols used in gothic tattoos include skulls, crossbones, skeletons, bats, ravens, and other death-related imagery. Gothic tattoos may also include occult or supernatural symbols, such as pentagrams, alchemical symbols, and other symbols associated with the gothic aesthetic.

Can gothic tattoos be colorful?

While gothic tattoos are often associated with black ink and a monochromatic color scheme, they can also incorporate other colors, such as red, purple, or green. It is ultimately up to the tattoo artist and the individual wearer to decide on the color scheme for a gothic tattoo.

Are gothic tattoos only for goths?

While gothic tattoos may be popular among members of the goth subculture, they are not exclusively for goths. Anyone who is drawn to the gothic aesthetic and feels comfortable with the permanence of a tattoo can choose to get a gothic tattoo, regardless of their personal style or cultural affiliations.

Like any tattoo, the pain level of a gothic tattoo will depend on the individual wearer's pain tolerance and the specific location of the tattoo. Some areas of the body are more sensitive to tattooing than others, so the pain level may vary. It is generally recommended to discuss pain management options with your tattoo artist before getting a tattoo.

How should I care for a gothic tattoo?

It is important to follow proper tattoo care instructions to ensure that your gothic tattoo heals properly and retains its quality over time. This may include keeping the tattoo clean and moisturized, avoiding sun exposure, and avoiding activities that could irritate the tattoo. Your tattoo artist should provide you with specific care instructions for your gothic tattoo.

Watch A Video Of A Gothic Tattoo Done By A Pro:

150+ Gothic Tattoo Ideas For Your Inspiration

Gothic tattoos are a popular and distinctive tattoo style that can showcase the wearer's fascination with the dark, mysterious, and often macabre themes of the gothic aesthetic. These tattoos can have a wide range of meanings and can be placed in a variety of locations on the body. If you are considering a gothic tattoo, it is important to carefully consider the placement and design of your tattoo, as well as any potential cultural or social implications.