200+ Dinosaur Tattoo Ideas to Unravel Mysteries of the Past

Dinosaurs Tattoos: The Meaning And Symbolism Behind Them

Dinosaurs are some of the most fascinating creatures to have ever roamed the Earth. Their size and power are unmatched even by animals today. And their extinction still remains a mystery. So, it's no wonder that they've become one of the most popular animal tattoo designs in recent years.

But what is the meaning and symbolism behind these prehistoric creatures? In this article, we will explore the history and meaning of dinosaur tattoos and help you decide if this is the right design for you. So, without further ado, let's get started!

Would you rather listen to the article instead of reading it? Just hit PLAY!

What Is The Meaning And Symbolism Behind Dinosaur Tattoos?

Dinosaur tattoos can be seen as a symbol of strength, power, and courage. These creatures were some of the most feared animals on Earth, and their size and ferocity still remain unmatched. For many people, getting a dinosaur tattoo is a way to show that they are not afraid to face their fears and overcome challenges.

These tattoos can also represent our fascination with the unknown and our desire to unravel the mysteries of the past. Dinosaurs have been a source of mystery since their discovery, and we continue to learn new things about them every day. Getting a dinosaur tattoo is a way to show your love for these creatures and your curiosity about their existence.

Dinosaur tattoos can also be seen as a tribute to our planet's history. These creatures lived on Earth for millions of years, and their legacy is still with us today. Getting a dinosaur tattoo is a way to show your appreciation for the natural world and the history of our planet. And, of course, they look really cool. People choose dinosaur tattoos for a variety of reasons, but the meaning and symbolism behind them are always personal.

There are endless possibilities when it comes to designing your dino tattoos. These creatures come in all shapes and sizes, so you can really let your imagination run wild. With so many dinosaur tattoos, here are a few ideas to get you started:

The king of the dinosaurs, the T-Rex is a popular choice for those looking to add a little bit of ferocity to their ink. This design can be done in a variety of styles, from traditional Japanese to hyper-realistic. This tattoo design means strength, power, and courage because this was one of the most feared predators ever to roam the earth.

T rex tattoos can also symbolize survival and resilience, as these creatures have been around for over 65 million years. Some people even get this t rex tattoo to represent their zodiac sign, as the T-Rex is the ruling animal of the Chinese New Year. This tattoo can be placed anywhere on the body but is often seen on the back or arms. Roaring Tyrannosaurus Rex Dinosaur is a perfect tattoo idea for men. 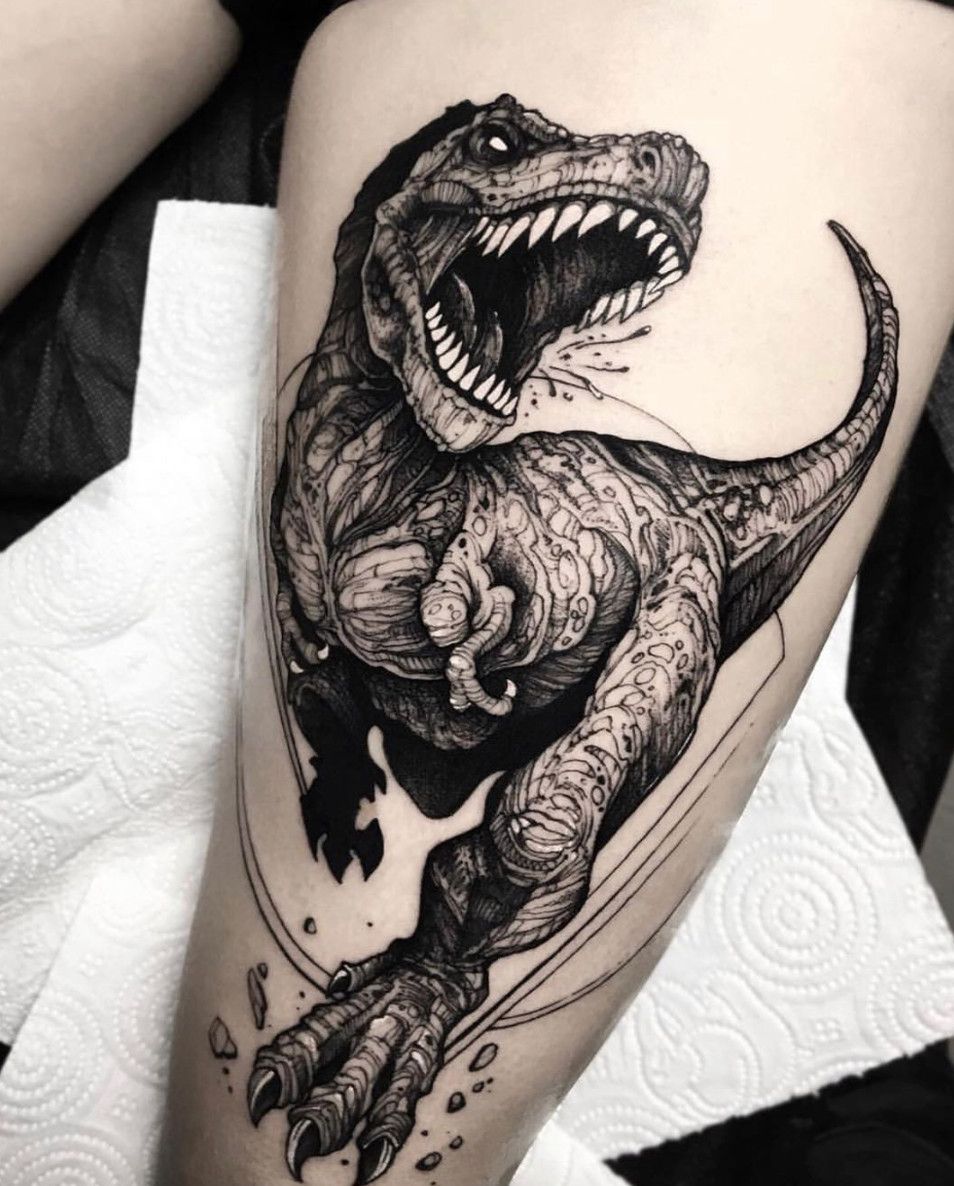 This gentle giant was known for its plates along its back, which were used for both defense and temperature regulation. The Stegosaurus tattoo design can be done in a variety of styles, from cute and cartoony to dark and realistic. It means courage, strength, and protection because of its massive size and impressive plates. Brontosaurus tattoos are also popular, as they are one of the most well-known dinosaurs.

The Stegosaurus was one of the most popular dinosaurs growing up, and its popularity has only increased in recent years with the release of movies like Jurassic park. If you're looking for a tattoo that will make a statement, this is the perfect design for you. It's sure to turn heads and start conversations, which is exactly what you want from a tattoo. 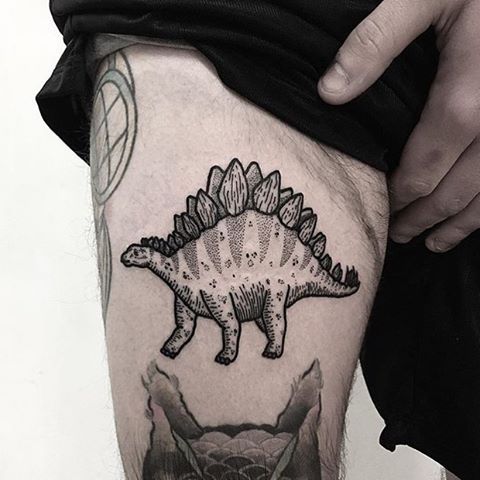 Not all dinosaur tattoo designs have to be massive and in-your-face. If you're looking for something a little more subtle, there are plenty of small and cute designs to choose from. These tattoos often feature cartoon dinosaurs or simple line drawings, and they can be placed almost anywhere on the body.

Small cartoon dinosaur tattoos are perfect for those who want to show their love for these creatures without making a big statement. They're also a great choice for those who are getting their first tattoo for childhood memories, as they're less intimidating than larger designs. The meaning behind these tattoos can vary, but they often represent childlike innocence and a love for adventure. 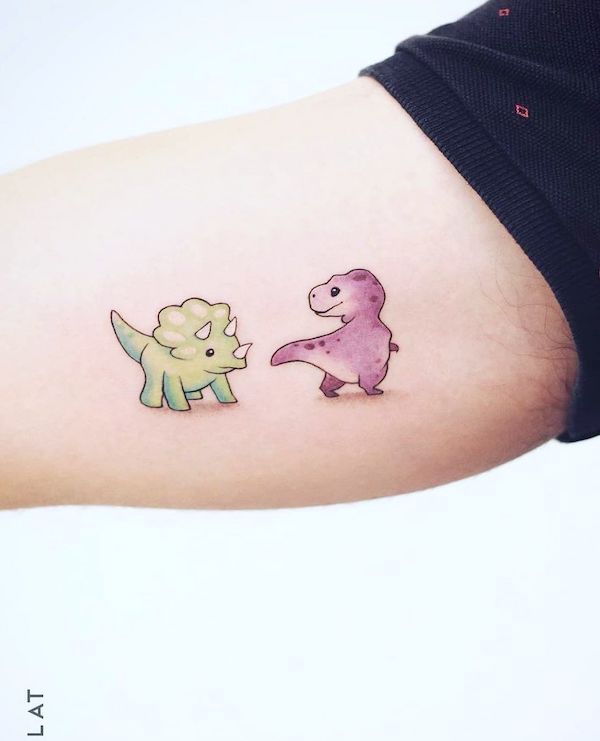 For those who want a tattoo with a bit of an edge, the dinosaur skull design is a perfect choice. This tattoo is often done in a realistic style, which can be quite striking. It can represent death and destruction, but also resilience and strength. It represents the cycle of life and reminds us that everything eventually comes to an end. The dinosaur skull tattoos can be a reminder to live life to the fullest and make the most of every moment.

The design can also be done in a more cartoonish style, which can be fun and playful. This type of tattoo is often seen as a statement of individuality. It can be a way to show that you're not afraid to be different and that you're comfortable in your own skin. Whatever the meaning behind it, the dinosaur skull tattoo is sure to turn heads and start conversations. 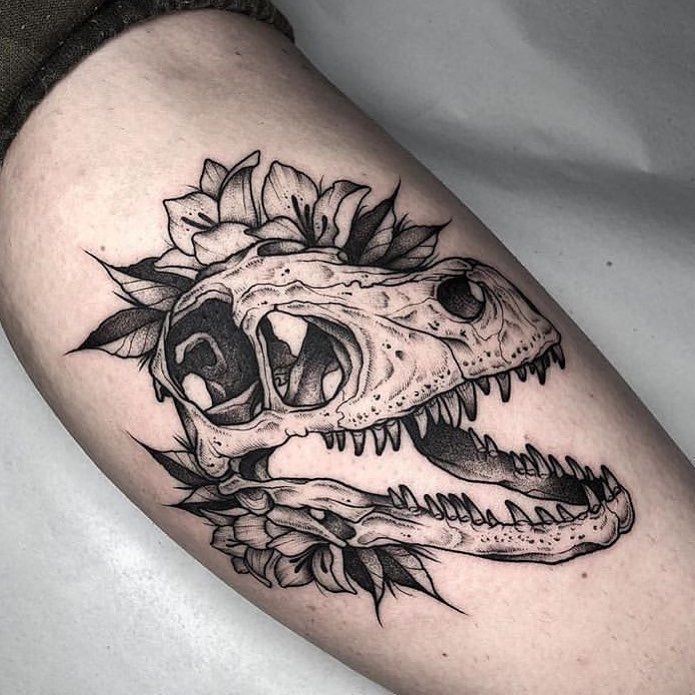 It is not uncommon to see a dinosaur skeleton tattoo. This is because the skull and bones of a dinosaur can be very intimidating, making them perfect for a badass tattoo. The meaning behind this type of tattoo can vary, but it is often seen as a symbol of strength and power. For some, it may also represent the fearlessness needed to face challenges in life.

Skeleton tattoos can be combined with other elements, such as flames or barbed wire, to make them even more badass. It is important to note that skeleton tattoos can be very painful, as they often require multiple sessions to complete. These massive beasts were some of the most feared creatures on Earth, and their tattoos are sure to strike fear into the hearts of those who see them. 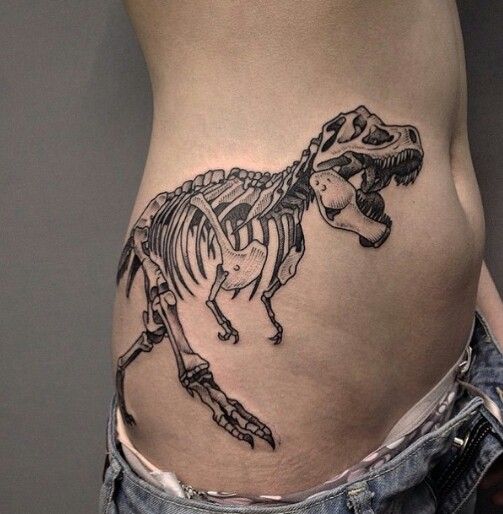 Watch A Full Time-Lapse Video Of A Dinosaur Tattoo Done By A Pro:

200+ Dinosaur Tattoo Ideas For Your Inspiration

There are a wide variety of dinosaur tattoo ideas and designs to choose from, each with its own meaning and symbolism. Whether you want a large and in-your-face design or something more subtle, there are sure to be the perfect dinosaur tattoo design ideas for you.

These tattoos are sure to start conversations and turn heads, so if you're looking for a tattoo that makes a statement, look no further than the dinosaur tattoo. And be sure to do your research before getting inked, as these tattoos can be quite painful. Jurassic park fans and dinosaur lovers alike will appreciate these fierce and impressive tattoos.