A sinking ship may represent the difficulties of life or a transition.

The origin of ship tattoos can be traced back to ancient seafaring cultures, where sailors would get tattoos to mark their achievements in sailing. They also served as symbols of luck and protection for those that ventured onto the open seas. The designs have evolved over time but still retain their original meanings.

Most popular Ship Tattoo Ideas and their meanings

There are endless possibilities when it comes to traditional ship tattoos. Here are a few ideas to get you started:

Traditional clipper ship tattoo: A clipper ship tattoo is a classic way to commemorate your seafaring life. The design typically features a three-masted sailing vessel with billowing sails and towering waves in the background. It symbolizes resilience and the power to weather any storm. The call to adventure and the determination to be "Homeward Bound" are represented here. 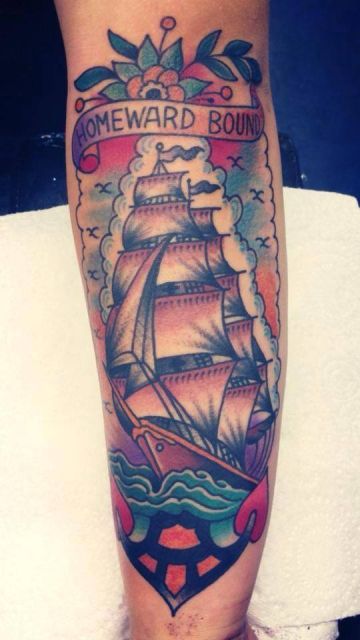 Ghost ship tattoo: The ghost ship is a popular choice for sailors and lovers of the sea. It represents an unknown journey and a mysterious voyage. This tattoo often features a menacing vessel with dark sails gliding through an eerie fog. The meaning of this design can be interpreted as facing your fears and pushing yourself to move forward despite the uncertainty of life. 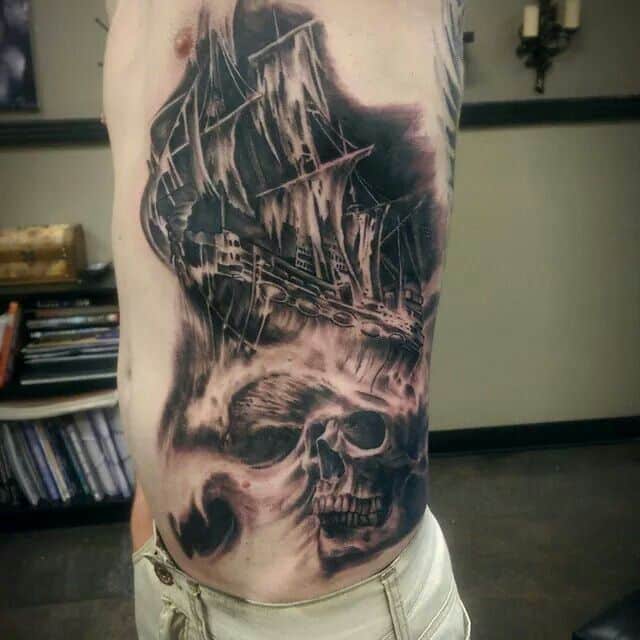 Ship and compass tattoo: Because sailors want to avoid getting lost at sea, many get compass tattoos. These tattoos represent direction, guidance, protection, and a safe journey. 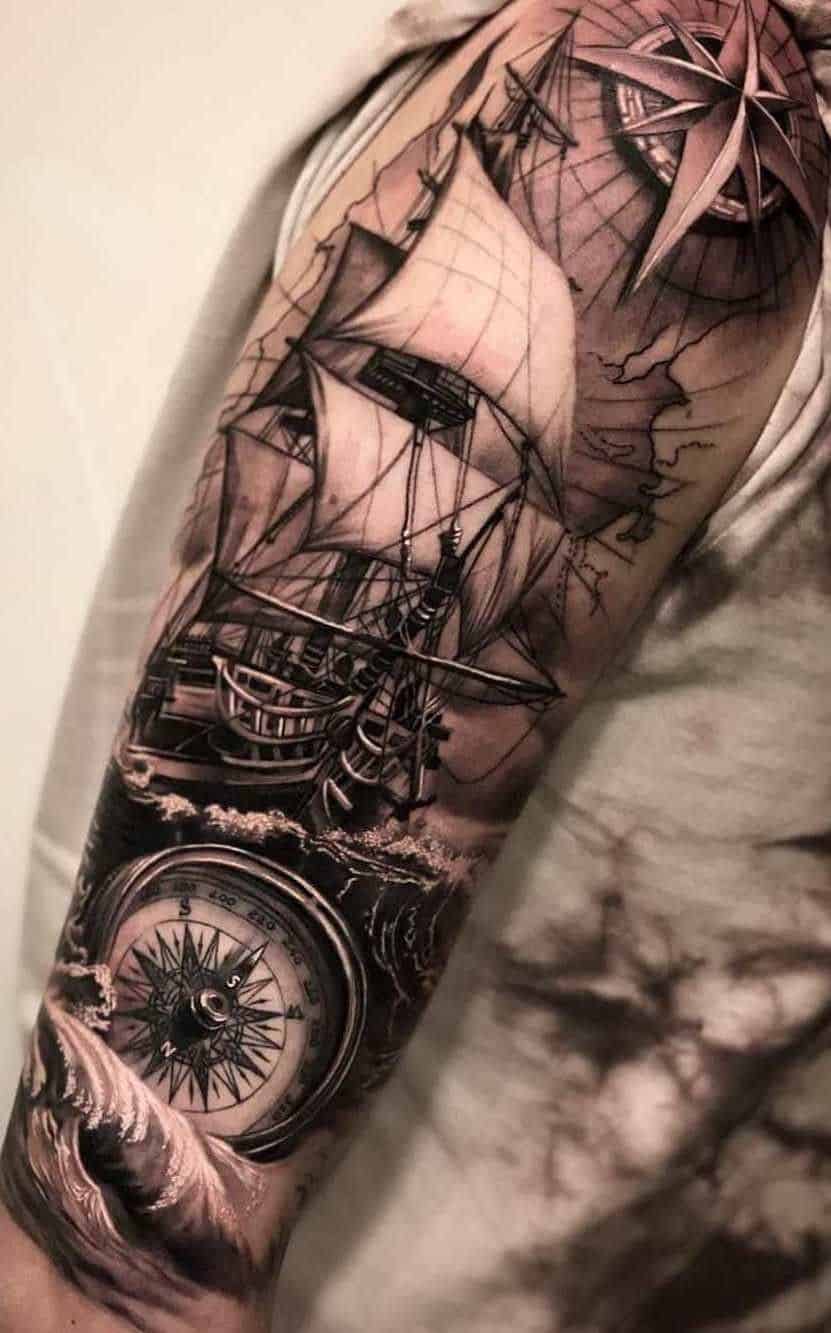 American traditional ship tattoo: This design features a classic sailing ship with stars and stripes prominently in the background. It is a great way to show patriotism and honor your country's maritime history. 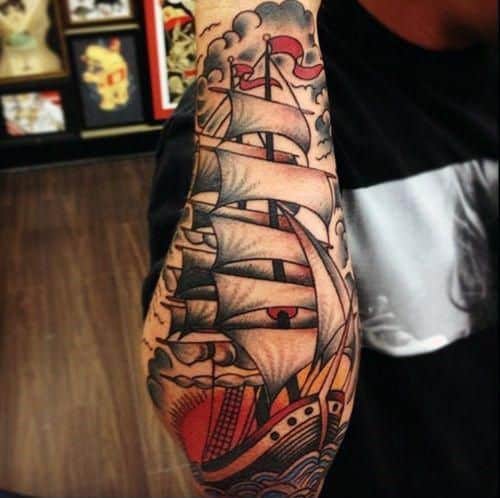 Sailor Jerry ship tattoo: Sailor Jerry was passionate about ships and knew everything there was to know about them. His iconic clipper ship tattoos symbolized his adventurous spirit and his determination to always find his way home. And they were always accurately inked – down to the smallest detail. 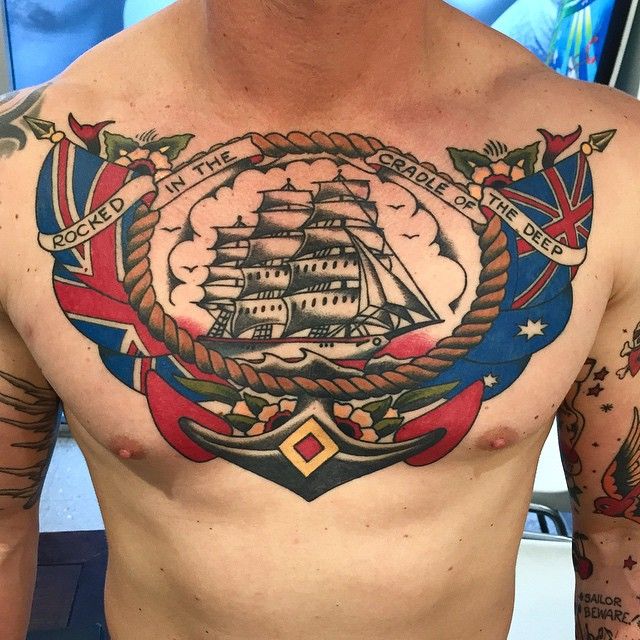 Traditional ship-in-a-bottle tattoo: This design is a tribute to those who have conquered their fear of the unknown. The ship, while still in its bottle, symbolizes the idea that anything is possible and that you can achieve your goals if willing to take on any challenge. 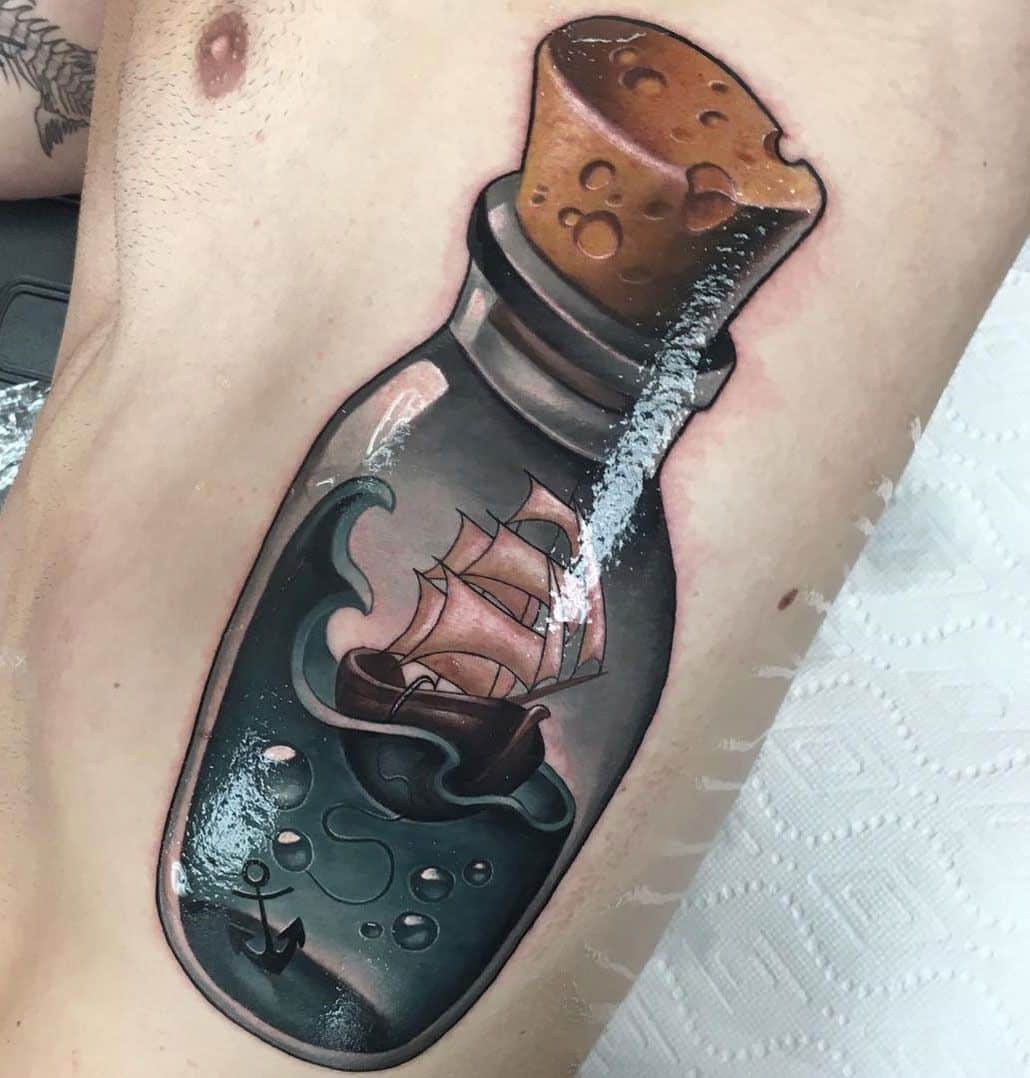 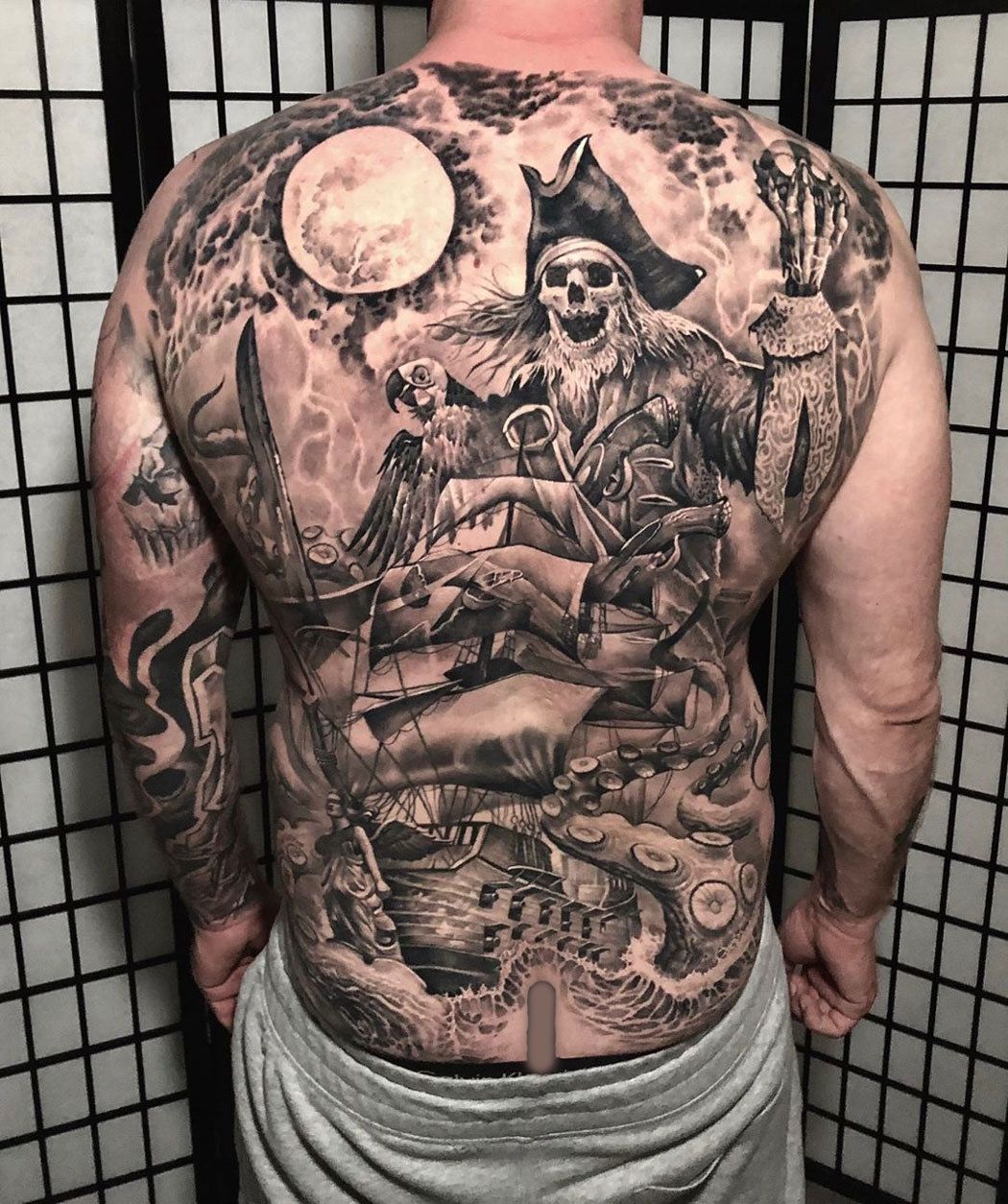 Traditional navy ship tattoo: A navy ship tattoo can symbolize pride and honor for those who have served in the navy. The boat is typically depicted sailing through choppy waters with the sun setting on the horizon. It represents the courage and strength needed to serve your country and make sacrifices for others. 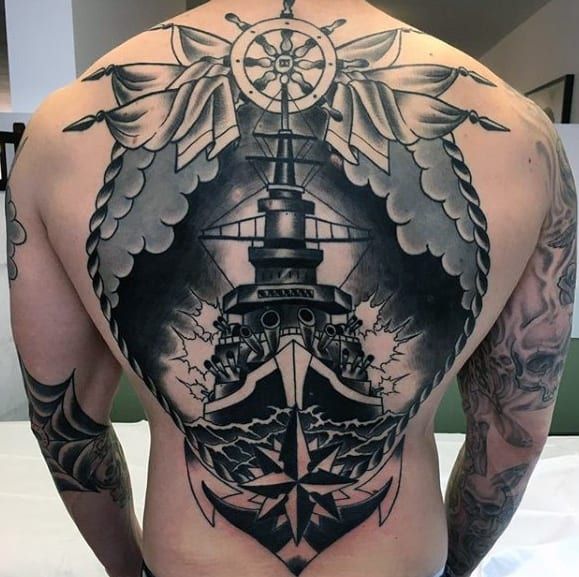 Traditional Viking ship tattoo: Vikings were known to be fearless warriors who explored the world in their longships. This tattoo is a great tribute to their courage and strength. It typically features a dragon-prowed ship sailing through tumultuous seas, representing the obstacles that have been overcome in life. 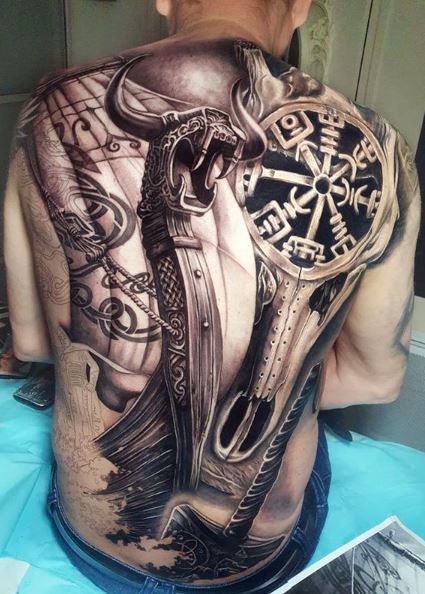 Old school traditional ship tattoo: This tattoo is a tribute to the sailors of days gone by. It typically features an old-fashioned wooden sailing vessel with billowing sails and towering waves in the background. The design symbolizes strength, resilience, and the power to weather any storm. 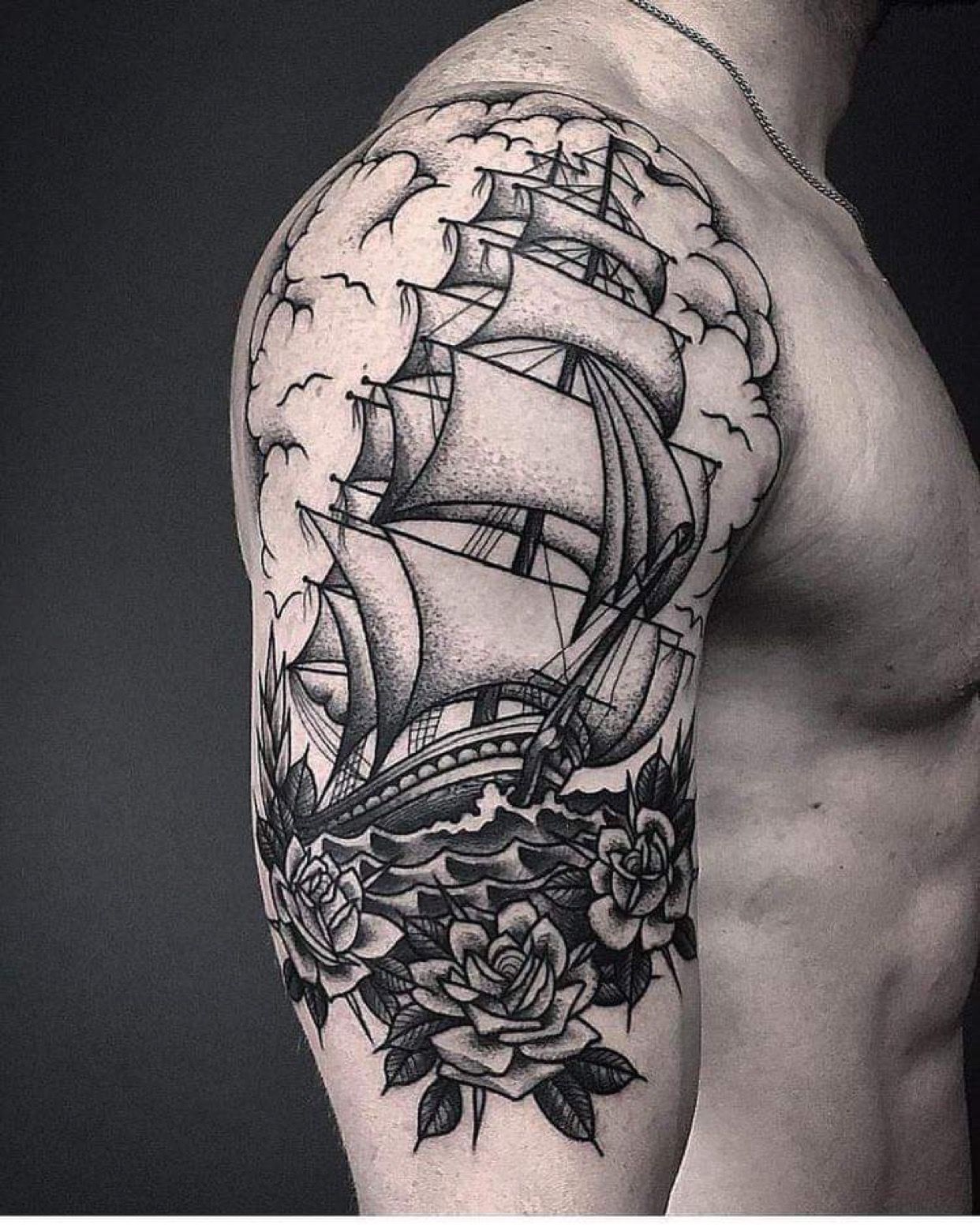 Japanese traditional ship tattoo: Japanese-style ship tattoos are a popular choice for those who love the culture and aesthetics of Japanese art. The design usually features a three-masted sailing vessel with colorful sails and billowing waves in the background. It symbolizes strength, courage, and determination to brave any storm. 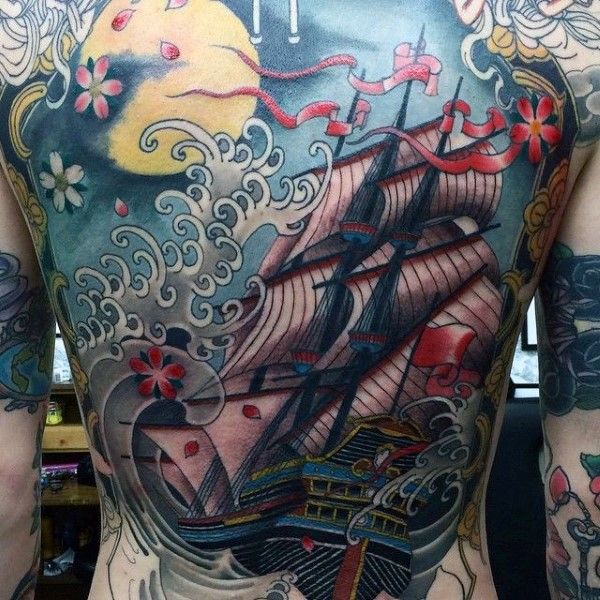 No matter what kind of ship tattoo you choose, it's sure to be a conversation starter and a reminder of your journey through life. It will remind you to keep pushing forward even when the waters are rough and that you can make it through whatever storm you face.

Traditional ship tattoos are a great way to commemorate your seafaring life and show off your adventurous spirit. Here are some of the best placement ideas for this type of tattoo, as well as their associated pain levels:

Stomach traditional ship tattoo: This placement is great for those who want their tattoo to be visible but not too conspicuous. The stomach area has low pain levels and is relatively easy to cover up if needed.

Back traditional ship tattoo: The back is a great place to get a larger tattoo. It provides plenty of space for intricate details and can easily cover up or show off, depending on the situation. The pain level here is relatively low, but you may feel discomfort due to the large size of the area.

Chest traditional ship tattoo: The chest is a great place to get this type of tattoo as it allows for plenty of detail and provides an eye-catching display. The pain level here is moderate but can be numbed with ice or anesthetic cream for added comfort.

Sleeve traditional ship tattoo: The sleeve is a great choice for those who want a larger tattoo. It provides plenty of space for intricate details and can easily cover up or show off, depending on the situation. The pain level here is moderate, but you may experience discomfort due to the large size of the area.

What does a ship tattoo symbolize?

A ship tattoo can have many different meanings, depending on the design. In general, it represents resilience and the power to weather any storm. It represents direction, guidance, protection, patriotism, adventure, and freedom.

Why did sailors get North Star tattoos?

The nautical star tattoo represents the North Star, historically used by sailors for navigation. It was believed that the tattoo would keep a sailor on course and help guide them home.

What does a fully rigged ship tattoo mean?

A tattoo of a fully-rigged ship from the age of sail indicates the sailor had sailed around Cape Horn, the rough, stormy waters near the southern tip of South America.

The old policy, from 2016, allowed enlisted Marines to have an unrestricted number of tattoos that their sleeve wouldn't cover. In contrast, officers and officer candidates could only have four visible tattoos when wearing the Marine Corps physical training uniform.

What is good luck on a ship?

People often nail a horseshoe to the mast or captain's cabin door to bring luck to the ship. The horseshoe is usually nailed with its ends pointing down, but I have also seen it attached to the ends up. It is also a good tattoo idea for luck.

What does a sinking ship tattoo mean?

A sinking ship tattoo, also known as a 'sailor's grave,' symbolizes the dangers sailors face at sea. These tattoos have been used for centuries as memorials for those lost at sea and continue to be popular among sailors today.

Watch A Video Of A Traditional Ship Tattoo Done By A Pro:

199+ Traditional Ship Tattoos To Get Inspired From

Tattoos are a great way to express yourself and show off your personality. Traditional ship tattoos are great for those who want to honor their seafaring heritage or pay tribute to lost loved ones. Whether you choose to go big with a sleeve design or go small with something simple, these tattoos can be both meaningful and timeless. You can create a beautiful design that will last for years with the right artist.