If you're looking to add a classic style to your look, neo-traditional tattoos may be just what you're looking for. This unique style emerged in the 1980s and has been gaining popularity. In this blog post, we will discuss the history of neo traditional tattoos and their meanings and symbolism. We will also provide tips on choosing a tattoo artist and taking care of your new ink!

The origin and history of neo traditional tattoos

Neo-traditional tattoos are heavily influenced by art movements from the past. These tattoos take inspiration from styles such as Art Nouveau and Art Deco, which were popular during the late 1800s and early 1900s.

These movements were inspired by Eastern art, which was becoming more popular in Europe then. This influence can be seen in neo-traditional tattoos' line work and color stories. Art Nouveau and Art Deco were also responsible for developing other art forms, such as architecture and interior design.

Neo-traditional tattoos take inspiration from all of these areas to create a unique and modern tattoo style. This style is characterized by its use of bold lines and bright colors and its often exotic or nature-themed subjects. If you're looking for a stylish and eye-catching tattoo, a neo-traditional one may be perfect.

What do neo traditional tattoos symbolize?

Neo traditional tattoos can also be seen as a way to express your individuality. This style of tattooing allows you to choose from a wide variety of designs, colors, and patterns. You can also mix and match different elements to create a tattoo that is truly unique to you. Whether looking for a small and simple tattoo or an intricate and detailed design, neo traditional tattoos offer endless possibilities.

Neo-traditional tattoos are a modernized version of traditional designs. They include more colors and shading while maintaining the bold lines characteristic of old-school ink. Themes can be anything from animals to flowers to portraits.

Can Neo traditional be black and white?

Many talented tattoo artists specialize in neo traditional tattoos. Some of the best include Antony Flemming, Igor de Morais, Sadee Glover, and many more. Each of these artists brings their unique style and vision to the neo traditional tattoo genre. Whether you're looking for a small and simple design or an intricate and detailed masterpiece, these artists will surely have something that will suit your needs.

Neo traditional tattoos can be placed anywhere on the body. However, they are often seen on the arms, chest, back, and legs. This is because these areas provide a larger canvas for the tattoo artist to work with. 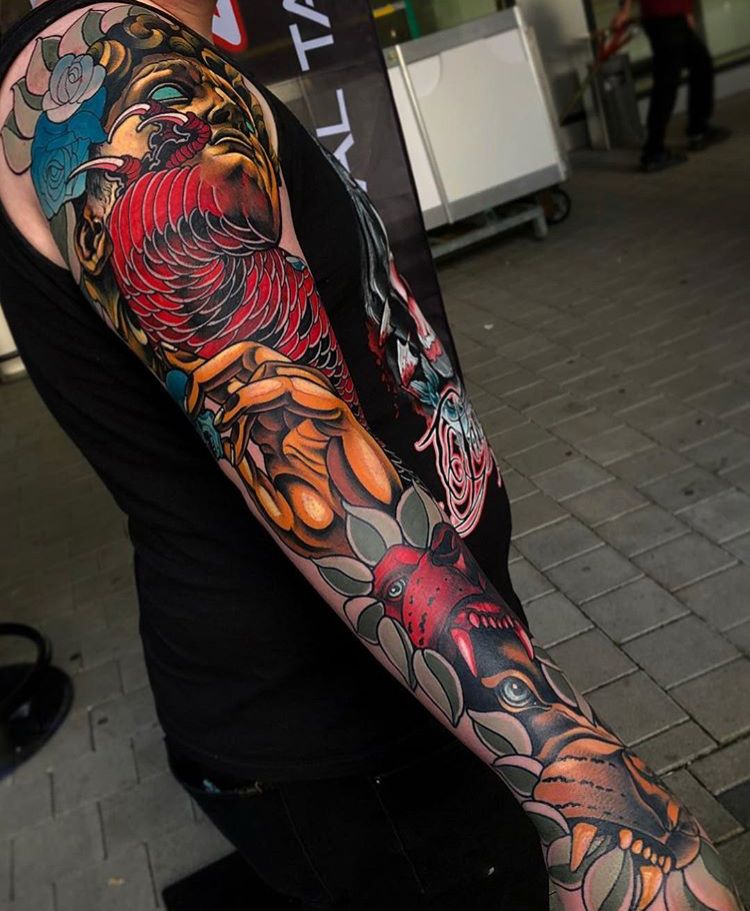 Most common neo traditional tattoo ideas and their meanings 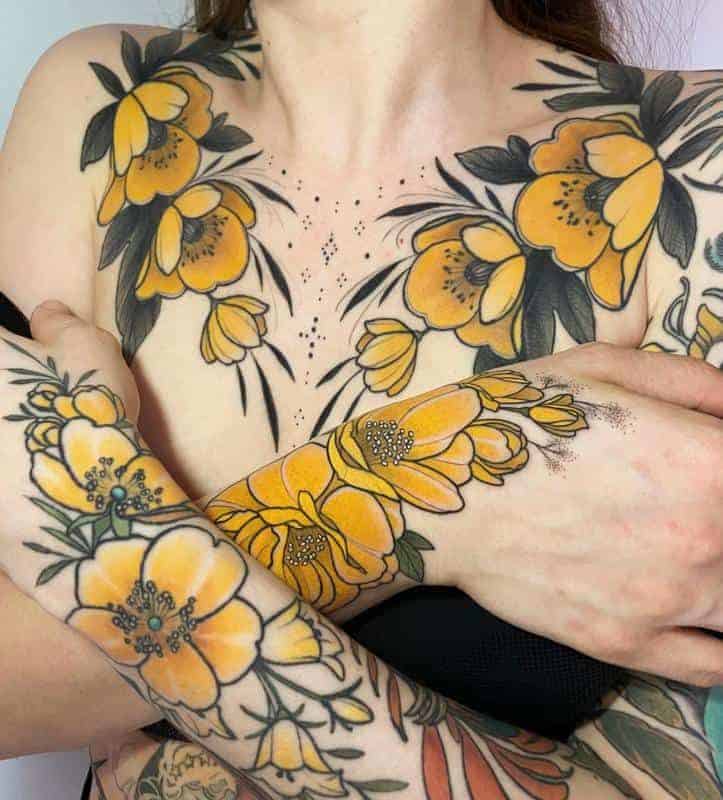 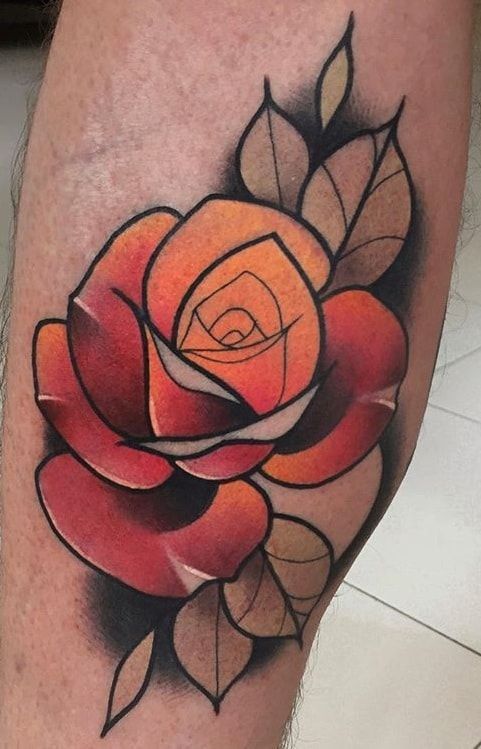 Neo-traditional Japanese tattoo: Neo-Japanese tattoos embody a Japanese foundation melded with countless facets of popular culture, past art history movements, and the ideas of various artists. Stone's oriental inspirations are complemented by new-school influences from illustrators and his graphic training. 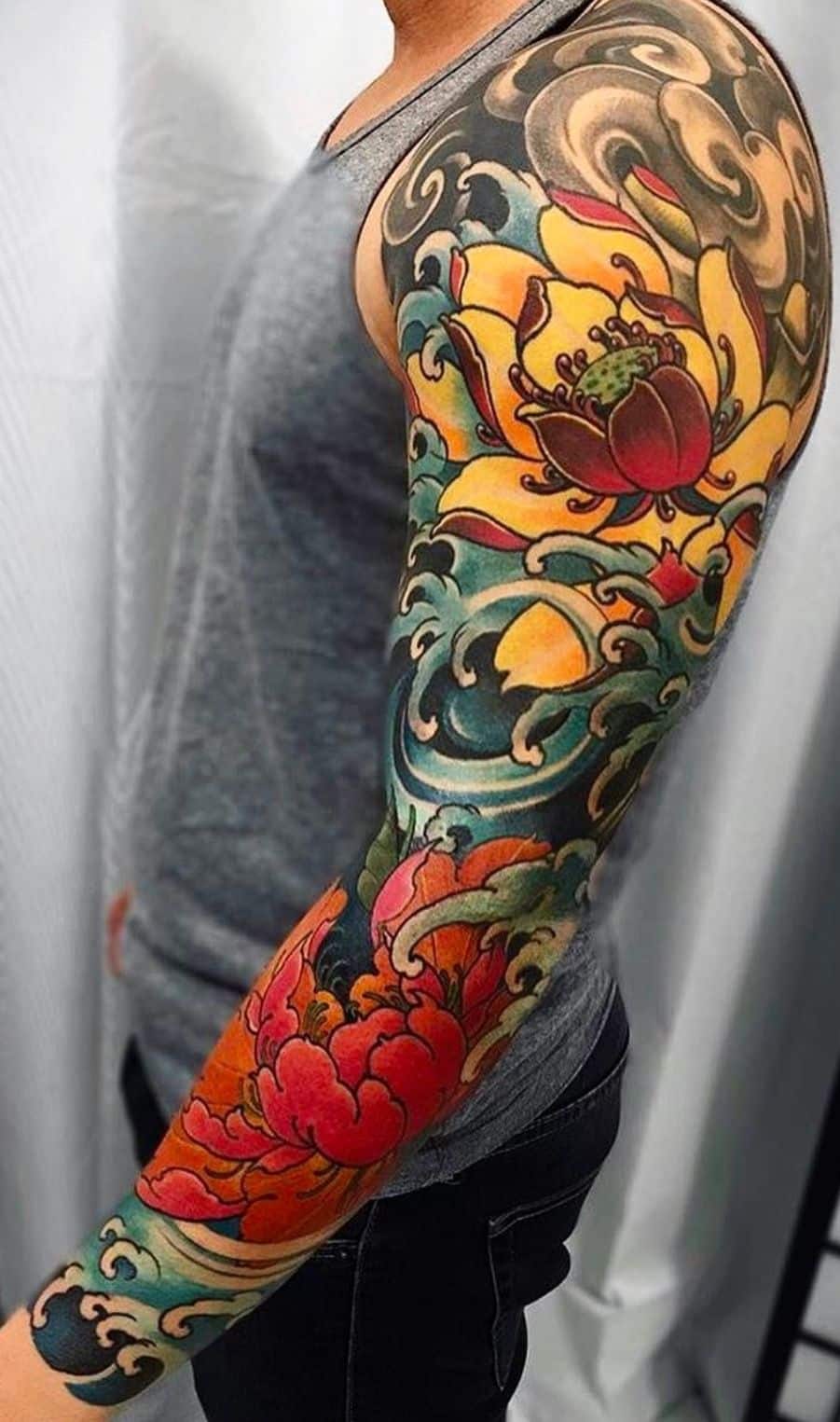 Neo traditional animal tattoos: give off a classic tattoo look, they often feature intricate patterns and detailed designs. These types of tattoos can be symbolic or even take the form of portraiture. 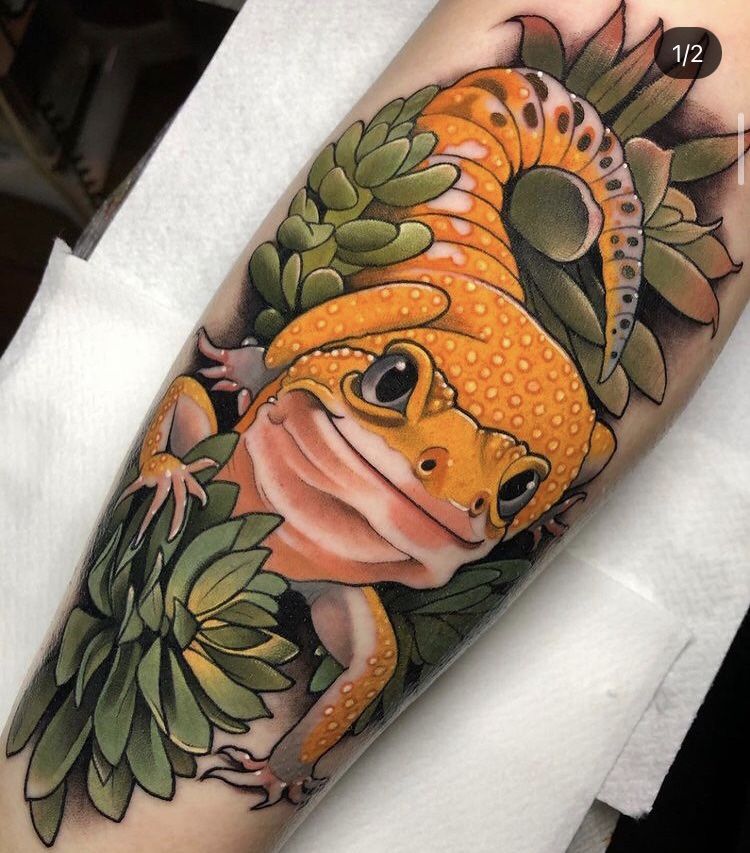 Neo traditional tiger tattoos: symbolize raw power and strength. For others, the apex predator is seen as representing freedom and independence. Tiger cubs are thought to be a perfect balance of power and innocence. It makes sense then that tiger tattoos on the chest, biceps, and forearms are so popular! 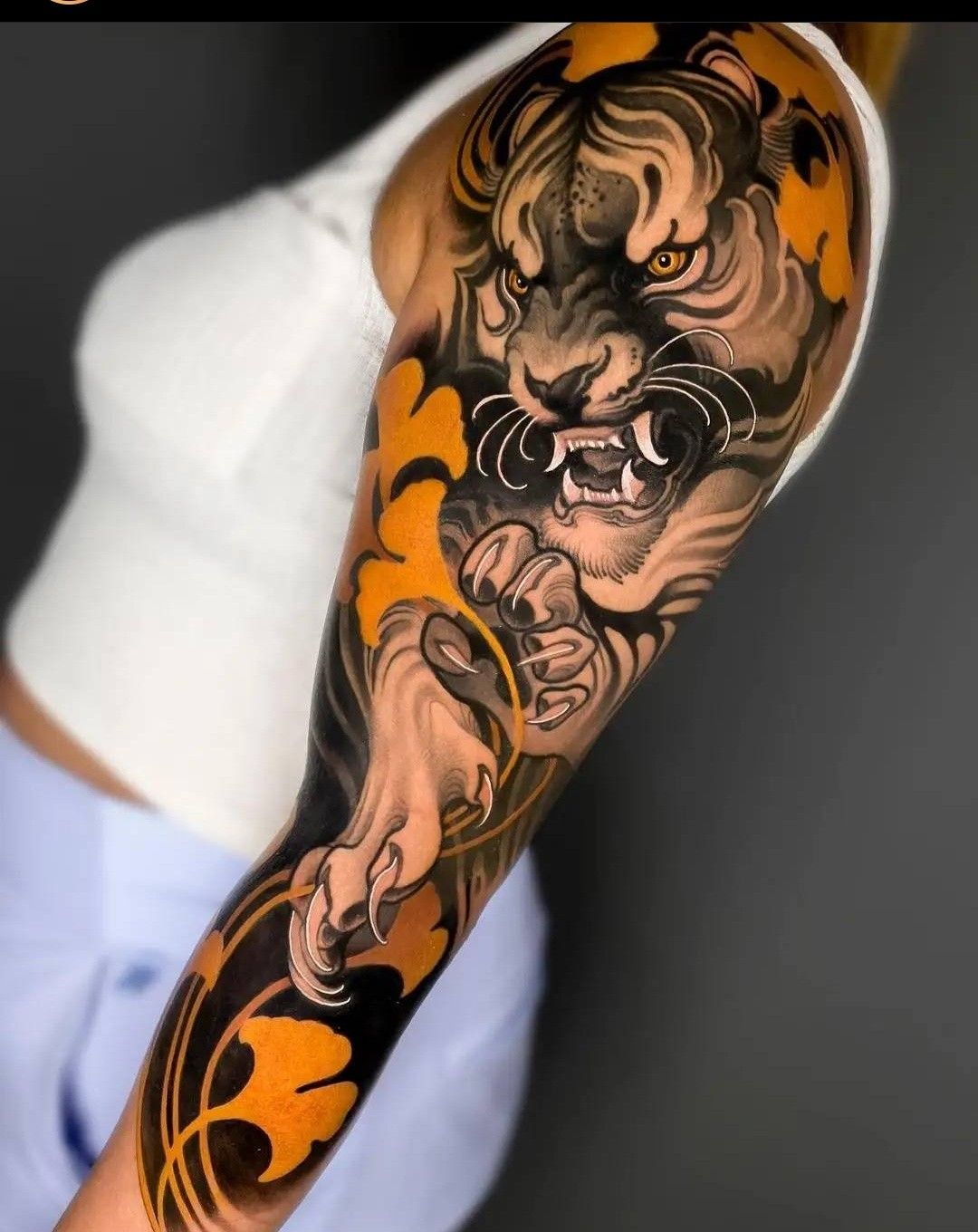 Neo traditional wolf tattoo: this is a beautiful and unique take on the classic wolf tattoo. With its bold lines and bright colors, it can symbolize power, relentlessness, loyalty, and courage. 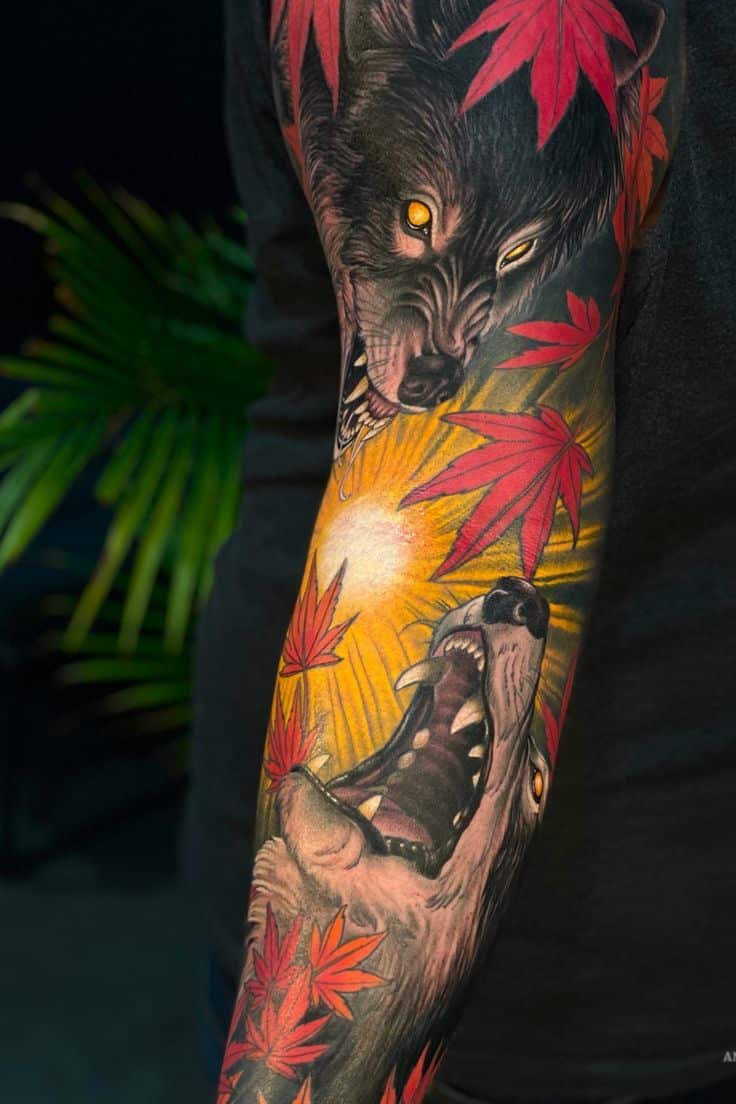 Neo traditional owl tattoo: owls symbolize a light that can guide them through dark times. Owl tattoos are often seen as attractive and unique, which may be why they are growing in popularity among people of all ages. 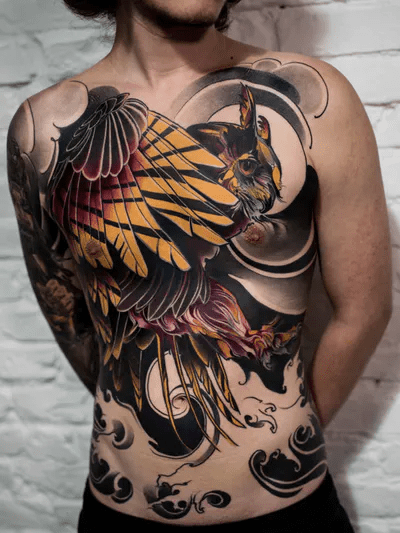 What is neo traditional tattooing?

What are the rules of neo traditional tattoos?

There are no set rules for neo traditional tattoos. However, many tattoo artists in this style often use bold lines, solid colors, and limited shading.

How much does a neo traditional tattoo cost?

The cost of a neo traditional tattoo will vary depending on the size, complexity, and location. Generally speaking, smaller and simpler tattoos will cost less than larger and more intricate designs.

What is a neo traditional tattoo sleeve?

A neo traditional tattoo sleeve is a tattoo that covers the entire arm from the shoulder to the wrist. This tattoo is often seen as a symbol of strength and power.

What is the difference between American traditional and neo traditional?

Neo Traditional allows for deeper dimensions, a wider array of line widths, and brighter colors than American traditional. Classic themes are still present but with an updated spin.

What makes a tattoo new school?

The new school tattooing style first became popular in the 1970s and was influenced by some aspects of older styles of tattooing in America. This style is often defined by its use of thick lines, bright colors, and exaggerated images.

Watch A Full Time-Lapse Video Of A Neo Traditional Tattoo Done By A Pro:

Neo traditional tattoos are a beautiful and popular choice for those looking to get inked. With their bold lines, bright colors, and intricate designs, they are sure to turn heads and make a statement. Whether you choose a neo traditional flower tattoo or a neo traditional tiger tattoo, you can be sure that your ink will be unique and eye-catching. So what are you waiting for? Start planning your next tattoo today!