2nd Amendment Tattoos That Scream: “Shall Not Be Infringed!”

The 2nd amendment to the United States Constitution protects the right of the people to keep and bear arms. Gun rights advocates often cite this amendment as justification for their position. However, there is significant debate over the interpretation of this amendment. Some believe it guarantees an individual right to own firearms. In contrast, others believe it only protects states' right to maintain militias.

What is the 2nd amendment?

The 2nd amendment to the United States Constitution reads: "A well-regulated Militia, being necessary to the security of a free State, the right of the people to keep and bear Arms, shall not be infringed.

This amendment has been the subject of much debate. Some people believe that it protects an individual's right to own firearms. In contrast, others believe it only protects states' right to maintain militias.

What does "shall not be infringed" mean?

What is the history of the 2nd amendment?

The 2nd amendment was ratified in 1791 as part of the Bill of Rights. It was based on a similar provision in the Virginia Declaration of Rights written by George Mason.

What has been the Supreme Court's interpretation of the 2nd amendment?

The Supreme Court has ruled that the 2nd amendment protects an individual's right to own firearms for self-defense. However, the Court has also ruled that this right is not unlimited. The government can place reasonable restrictions on gun ownership, such as background checks and waiting periods.

What are some 2nd amendment tattoo ideas?

There are several different ways to design a 2nd amendment tattoo. Some people choose to include the amendment's text. In contrast, others prefer to create a more abstract tattoo that represents the idea of gun rights.

Several symbols can be used in 2nd amendment tattoos, such as the American flag or the pistol.

Some people get 2nd amendment tattoos to show their support for gun rights. Others choose to get them to show their rebel spirit or to make a statement about their Second Amendment rights.

If you're interested in getting a 2nd amendment tattoo, check out some of the designs below.

1. A simple text 2nd amendment tattoo that includes the text of the amendment: 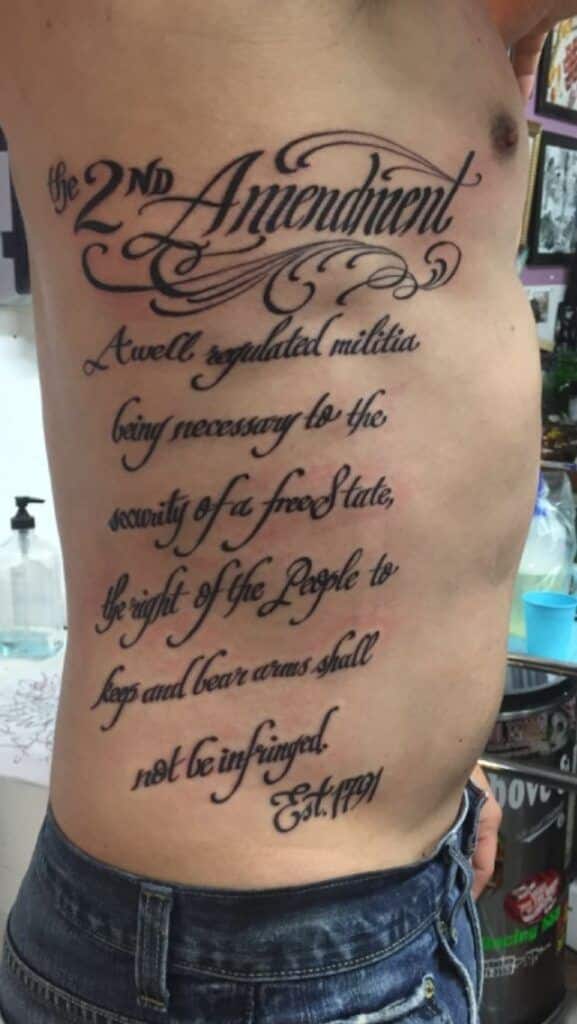 2. 2nd amendment gun symbol tattoo: that represents the idea of gun rights with an abstract symbol or design. 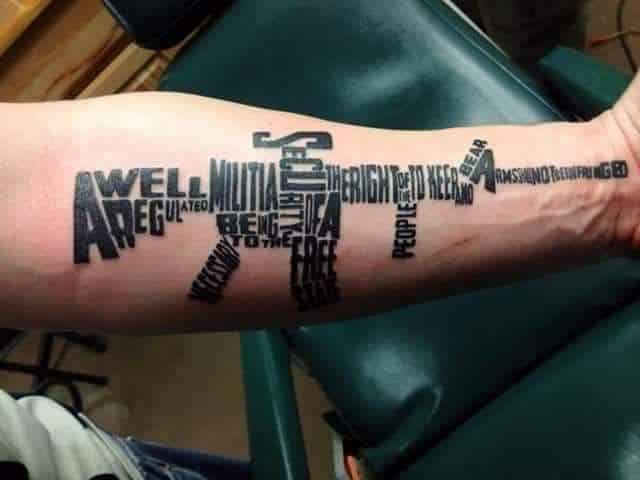 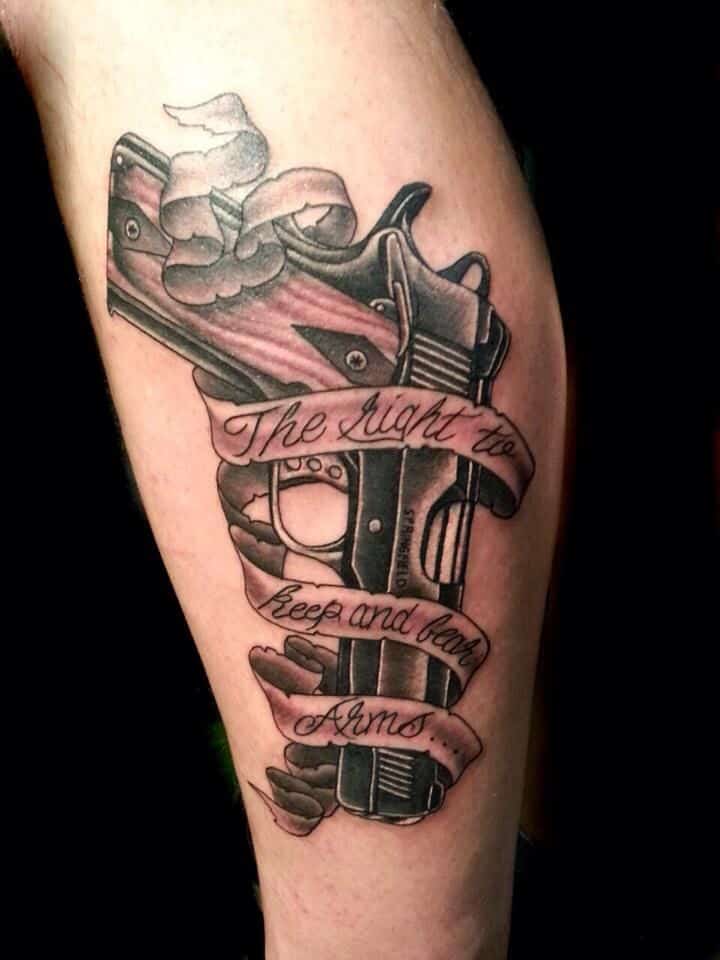 4. A simple text tattoo with the words "Freedom is not free" written below it. 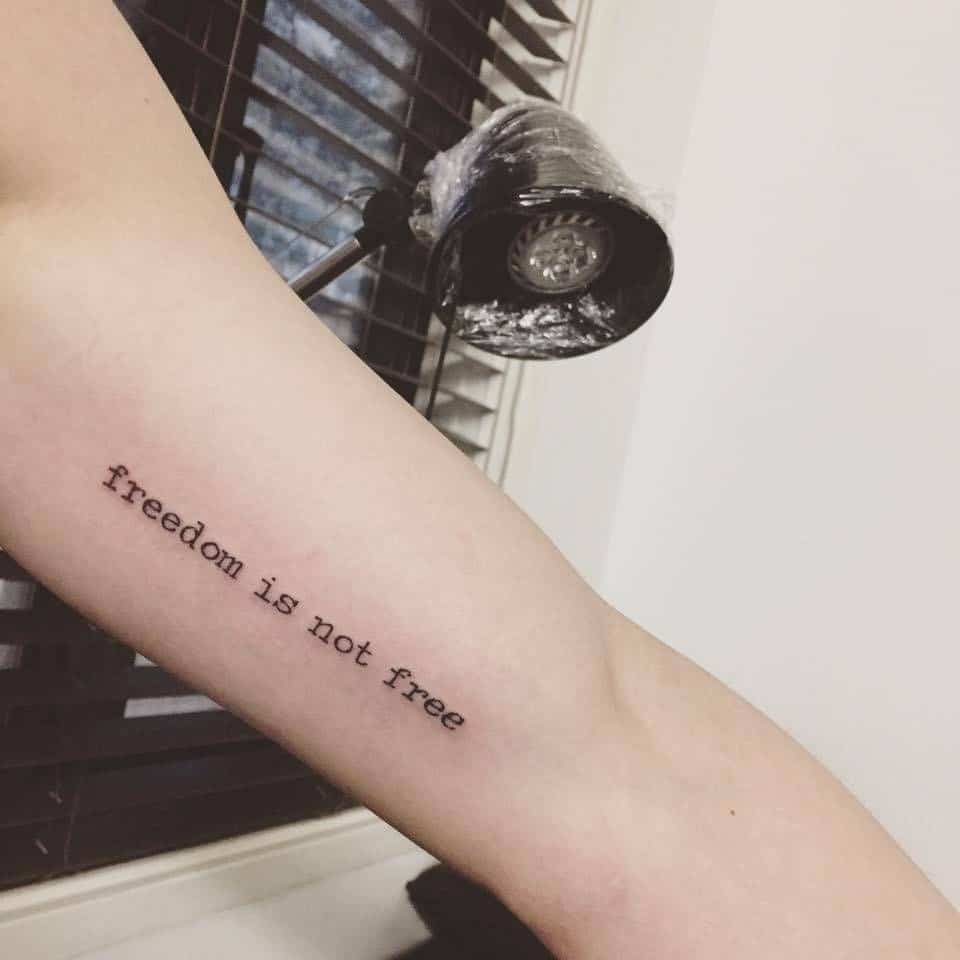 5. A 2nd amendment "we the people" tattoo, which says that the control is in the people's hands. 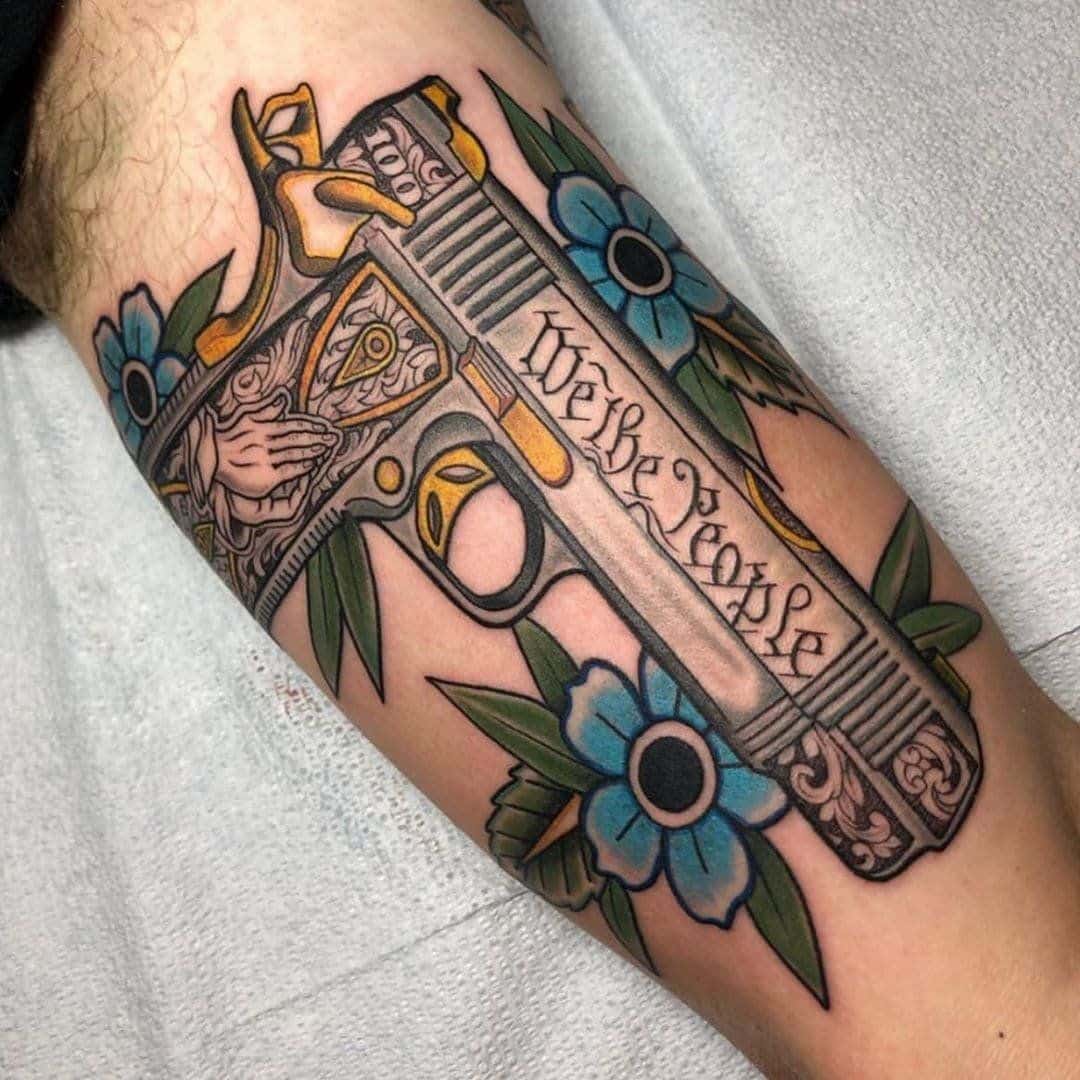 These are just some ideas for 2nd amendment tattoos. There is no right or wrong answer regarding getting a tattoo. Choosing a design that has personal meaning and will be happy with for years to come is essential. Thanks for reading!

Why are 2nd amendment tattoos so popular?

It strongly correlates with 1776 tattoos because one symbolizes the independence of the united states. The other is a part of the fundamental laws of it, like the right to own and use a gun, an accurate patriot tattoo idea.

What does a We the People tattoo mean?

What does the "we the people" tattoo on your arm signify? The meaning of We the People is one of the most popular tattoo designs with many interpretations. It is usually used to represent patriotism or national pride. It might also be interpreted as a sign of support for the Constitution or Bill of Rights.

What is a Molon Labe tattoo?

The Greek phrase "Molon Labe" translates to "come and take them." This saying has been adopted by many constitutional supporters in the United States, particularly those who are passionate about the right to bear arms. These gun owners are expressing their political beliefs with tattoos of this Defiant statement.

What is the true meaning of the right to bear arms?

People possess guns for different reasons, such as self-defense or hunting. The purpose of gun rights is to protect people's lives, liberty, and property. It is a fundamental right that allows people to keep and bear firearms for protection. This right is not unlimited, and it is subject to specific regulations.

What does a We the People tattoo mean?

The "We the People" tattoo is a popular design with many meanings. In most cases, it symbolizes patriotism or national pride. It can also be seen as a support for the Constitution or the Bill of Rights.

Why is the Second Amendment so controversial?

The heart of the debate is whether or not individual Americans should be allowed to own weapons, specifically firearms, and if so, what types. In 2008, The United States Supreme Court ruled that the right to bear arms is an individual right similar to others in the Bill of Rights.

Shall not be infringed meaning?

Infringement is a transitive verb. The right of the people to keep and bear arms, as stated in the United States Constitution, shall not be infringed - amendment II particularly: infringing on the rights of a copyright, patent, trademark, or trade name owner.

How many times has the 2nd amendment been changed?

Since the District of Columbia v. Heller Supreme Court case in 2008, which established an individual's right to keep a handgun at home, 1,400+ Second Amendment challenges have been decided--but it is also important to note that these rights are subject to various forms of regulation.

Watch A Full Time-Lapse Video Of A 2nd amendment Gun tattoo Done By A Pro:

100+ 2nd amendment and Patriotism Related Tattoo Ideas for Your Inspiration

200+ Heart Tattoos That Cover Everything from Love to Loss